No matter how much you’re staying in this gorgeous city full of life, history and culture, you will be amazed at just how much there is to see. Belgrade is a city with a long and turbulent history and thus it contains centuries of cultural treasures from various cultures that left their unique marks on this beautiful city. From Romans all the way to the Ottomans, Belgrade was always a focal point, right at the crossroads between the East and the West. Here are some of the most famous places to visit in Belgrade.

To tell the story of Belgrade’s landmarks we have to start with the biggest and certainly the oldest. Kalemegdan first served as a Roman military camp back in the 1st century AD and it first became a Serbian stronghold in the 13th century. Located right on the spot where Sava flows into Danube, this fortress has a long and bloody history of battles and its current battle-worn appearance certainly shows it. The top of the fortress, at the
Monument of the Victor, offers a breathtaking view of the unique communist architecture of New Belgrade as well as other parts of Belgrade. When you feel like taking a break from sightseeing, the fortress offers a choice of restaurants that are certain to satisfy all of your gourmet needs. The Republic Square is quite literally the heart of the city, a famous meeting place, always busy and home to numerous museums, cafes, restaurants, bookstores, theatres and apartments for rent in Belgrade (Serbia) . Some of Belgrade's most recognizable buildings can be find around this area. Buildings like the National museum and the magnificent building of the National theatre. Statue of Prince Mihailo proudly stands at the center, reminding us all of his great achievements in the 19th century.
As for Knez Mihailova Street, when people mention the center of Belgrade, this is what they're talking about. As one of the oldest landmarks in the city it houses some of the finest examples of Belgrade architecture with glorious mansions built at the end of the 19th century. However, it’s far from being just a historical landmark. This street serves as the biggest pedestrian and shopping zone in Belgrade and aside from world famous brand stores it offers a plethora of authentic cafes and restaurants in many smaller streets that intersect with it.

Are you a fan of Bohemian culture? Then this vintage street paved with cobblestone is definitely a place for you - offering a wide variety of  unique restaurants and “kafanas” (a style of taverns), with authentic alcoholic beverages and traditional cuisine that are sure to bring a smile to your face. When people talk about Belgrade they usually speak of that "special something" this city has, be it a feeling, a smell or a taste. This street is the epitome of that unique spirit that can only be found in Belgrade. If you are of a hedonistic person or just enjoy trying new foods wherever you go you absolutely mustn't miss out on this gorgeous piece of pavement frozen in time that is sure to leave you with unforgettable memories for years to come. Moreover if you truly want to experience life in this bohemian quarter, you should consider staying in one of the Skadarlija apartments. Belgrade along with this timeless street is sure to satisfy all of your gourmet cravings.

Archaeological investigations that took place in this mystical part of Belgrade over the course of the 20th century have resulted in some truly remarkable findings. They showed that Vinca was the home of a Neolithic tribe that lived and worked together in this area and had a huge influence on technology and other important advancements of that time - those influences have appeared all around - reaching as far as 1000 kilometers in diameter.
Besides neolithic findings, there are traces of cultures that lived during Copper and Bronze ages as well as in medieval times. This serves to show us that this region has been inhabited time and time again by different tribes and ethnic groups all throughout the course of  human history, making it a beautiful cluster of cultural diversity and important historical remnants.
Visit the Vinca archaeological site and dive into a millenniums worth of history and culture.

If for some reason you thought the streets of Belgrade weren’t busy enough during daytime, you’ll be amazed at how alive they become when the sun starts to set. There is a very good explanation for that too - during the 90's Serbia has gone through some truly rough times: the breakup of Yugoslavia and the civil war that followed, sanctions, inflation, air bombing and an overall high unemployment rate had a devastating effect on the culture - so they had to make their own form of entertainment, and night was the best time to unwind and cut loose.
Because of that, the nightlife industry boomed in this area, making it quite unique and different from anywhere else in the world. Clubbing was literally taken to the next level in Belgrade, with better organization and a lot more to offer that other capital cities in the region. You can literally take a random pick out of hundreds of differently themed clubs that work almost every day of the week and you will not be disappointed. The only difference between Belgrade and let's say Ibiza, is that Belgrade's doors are open all year round!
Belgrade is not only the home of many clubs, but also host of numerous festivals as well - from the famous Beer Fest to the Foam Fest and the Sensation Party. Just take your pick and have the time of your life.

Although Belgrade isn’t among the most advanced cities in Europe, it has been largely underestimated and somewhat veiled in mystery over the course of the last few decades - that is all changing rapidly. Thousands of people from Europe and the rest of the world are discovering just how much this radiant city has to offer. A rich history, incredibly diverse cultural heritage, savory traditional food, heartwarming music and an abundance of art are really all the reasons you need to visit this gem at the very heart of the Balkan peninsula.

House for a Day - Ideal place to isolate yourself in the age of the virus
30 Apr 2020
Apartments
A house for a day in the circumstances of a coronavirus epidemic is the ideal solution for a break from a lockdown. 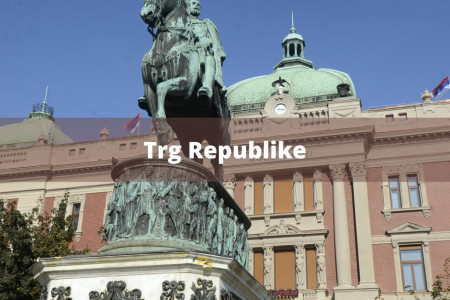 Republic Square Belgrade - Symbol of History
10 Apr 2020
Discover Belgrade
Belgrade Square represents the central city square and the heart of the capital. It is the center of city events and one of the most beautiful parts of Belgrade
Login
Log in with Facebook